Hilly, but beautiful; we start and finish in Villeneuve-les-Avignon; 8 days / 7 nights. This tour is available as a self-guided option.

Probably the most beautiful of our French cycling tours, and probably the best food.

The most beautiful parts of Provence are the Lubéron National Park and the Alpilles, and of course we'll spend plenty of time exploring them. They're both hilly, but no hills means no views!

Provence also boasts some wonderful wines, including the world-famous Chateauneuf du Pape as well as the neighbouring appéllations of Gigondas, Vacqueyras and Beaumes de Venise. We've organised a series of wine tastings, where we'll be able to reflect on the beauty of the Abbey de Senanque and its spectacular lavender fields. 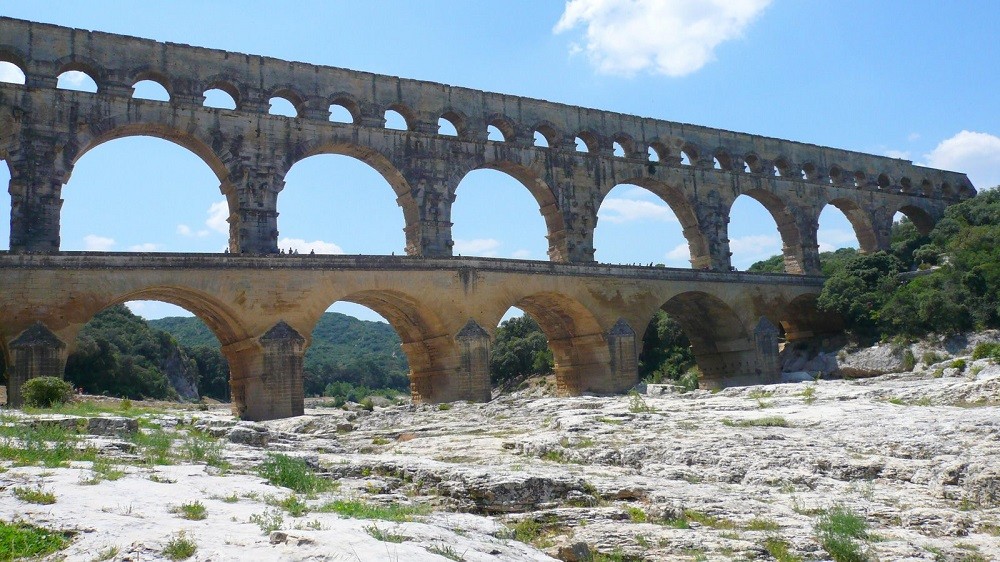 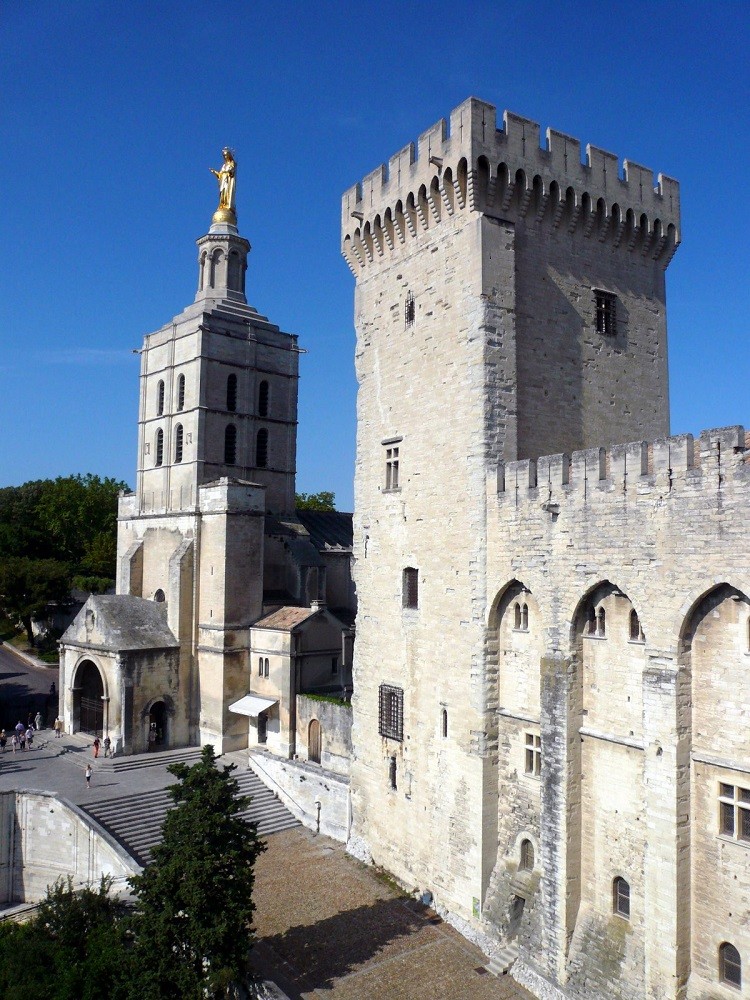 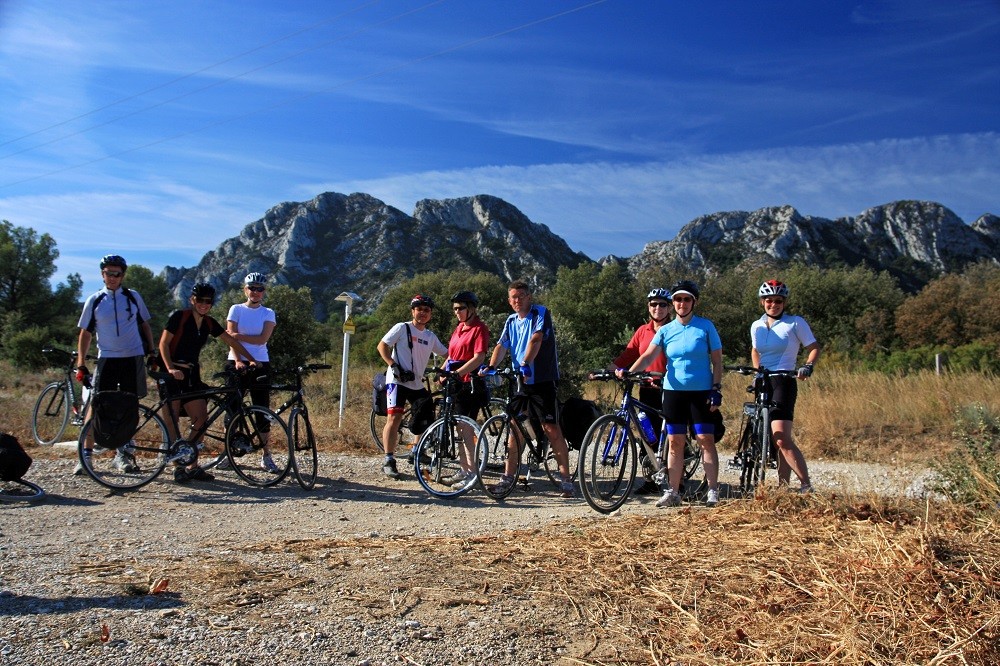 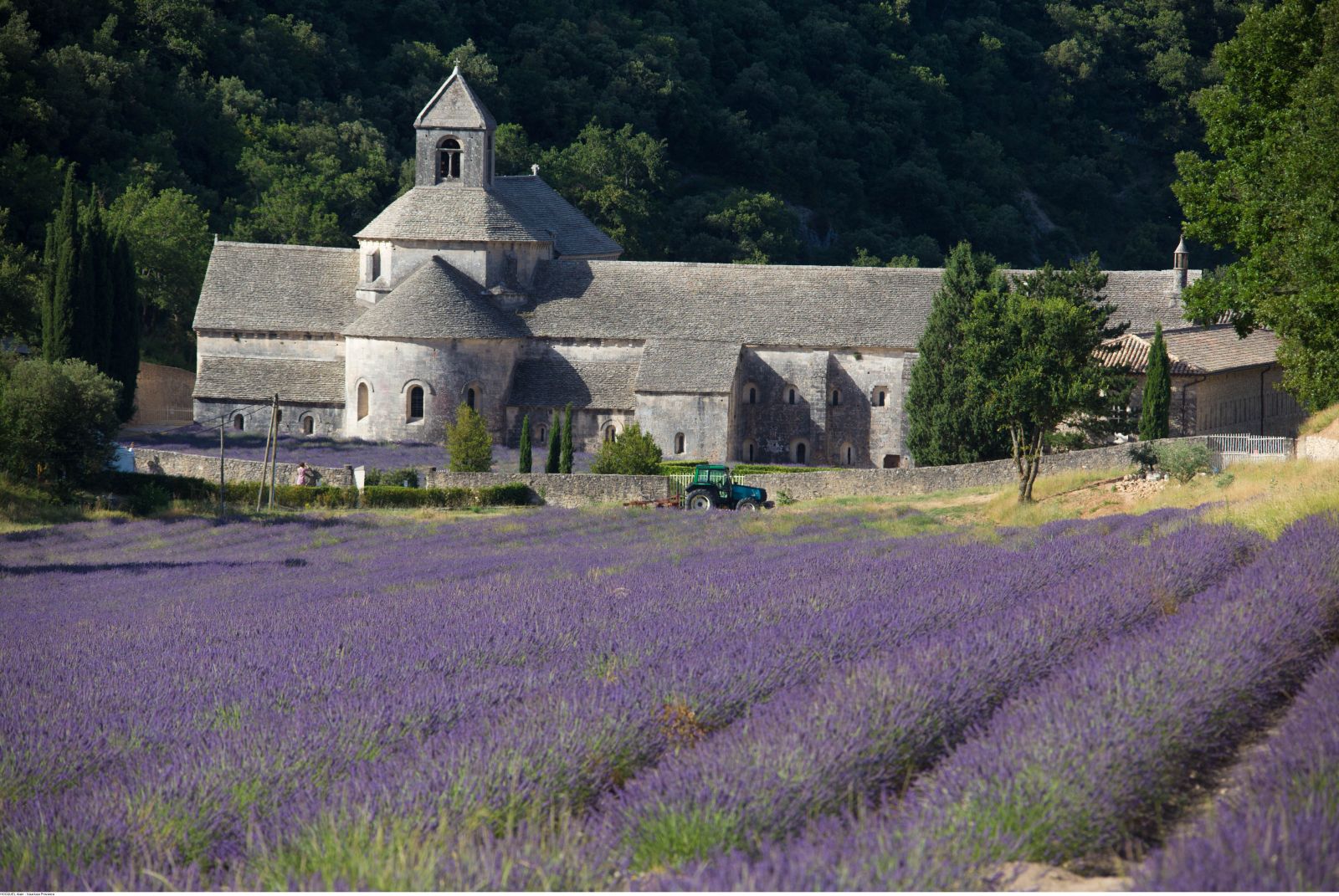 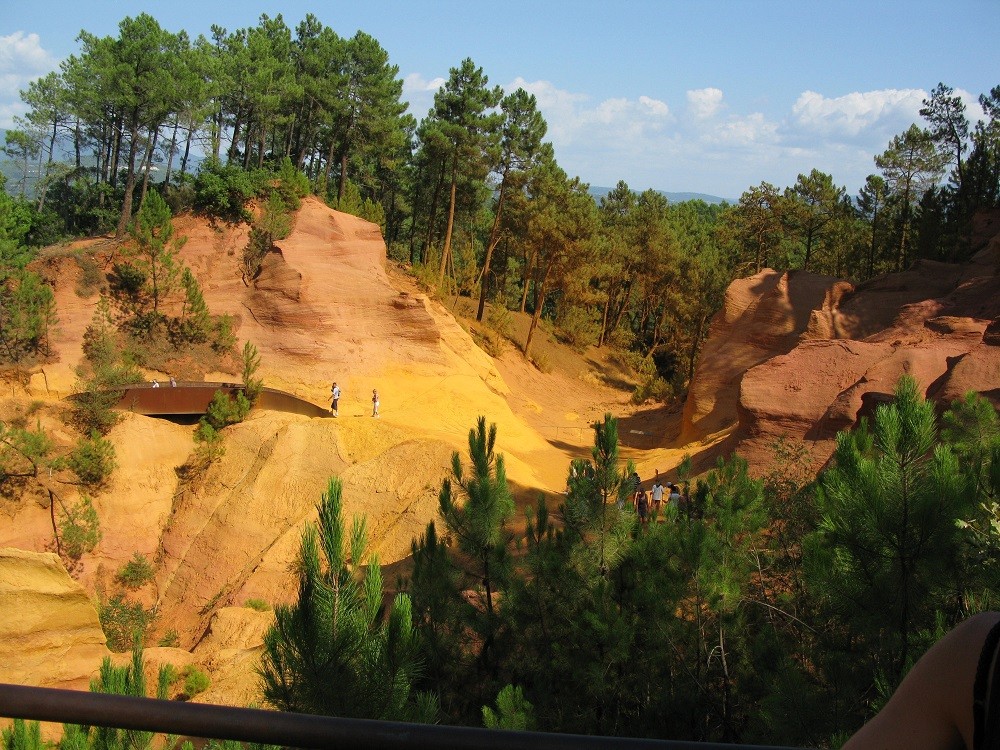 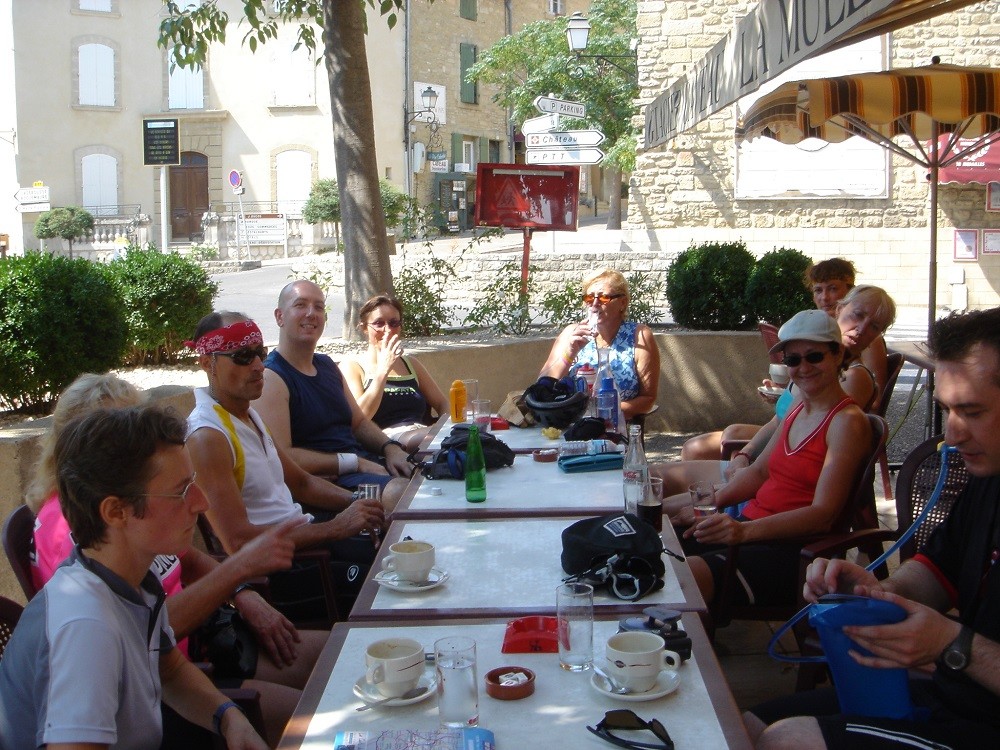 Day 1 Arrive in Avignon - City of the Popes

Arrive at the hotel in Villeneuve Les Avignon. Most people arrive in Avignon by TGV either from Paris or from London, although there are some direct flights to Avignon and to Nimes. Our first night is spent at the Residence les Cedres with our host, Christophe.

An easy day to get into the swing of things. We'll take advantage of of a cycle path to follow the River Rhone almost as far as Aramon, where we cross the river and continue our way to St Rémy de Provence. In St Rémy we'll visit the Roman town of Glanum just outside the town.

Dating from 27 BC, Glanum was part of the Romanisation of Provence, but was abandoned 300 years later after the town was overrun by the german Alamanni tribe. By the time the population left Glanum for St Remy, just a mile away, they had built two huge monuments, a mausoleum and a triumphal arch. The town itself, with its underground water systems broken and blocked, became submerged in mud and scree sediments from the nearby Alpilles, so until the 1920s Glanum had disappeared, there were just two huge Roman monuments next to the road which is now the D5. It wasn't until 1921 that anybody realised that on the other side of the road was a hidden Roman town. It's great, fascinating, and we'll go and have a look.

On the way we'll pass the asylum where Vincent Van Gogh voluntarily committed himself after his tempestuous time in Arles (remember that ear!).

St Remy itself is a very pretty town, lots of nice bars and restaurants. We'll stay at the Castelet des Alpilles, and we'll eat in the heart of St Rémy.

Day 3 Our first little climb, in The Alpilles

We set off due west, as if we were headed back towards the Rhone, but we turn onto the D27 to cycle through the Alpilles to Les Baux de Provence. This must be the most beautiful stretch of cycling on any Chain Gang tour. This road is reason enough for somebody to invent the bike.
We follow the little river, the Gaudre de Valmouriane, winding through spectacular scenery as the Alpilles begin to build either side of us. Truly beautiful - maybe we should just cycle up and down this road all week?

We've a decent climb into Les Baux, a fascinating, ruined fortress. Ruled over for centuries by (alleged) descendants of Balthazar, one of the biblical 3 Kings , this fortress was able to wreak havoc throughout Provence and as far afield as Toulouse. Eventually it became part of France, but following a rebellion was destroyed by none other than Cardinal Richelieu of Three Musketeers fame.

Ten years later it was given to Monaco (the current Marquise of Les Baux is Princess Caroline of Monaco) and in the 19th century was the site for the discovery of aluminium ore, hence 'bauxite'.

Astonishingly, Les Baux became such a backwater that it effectively disappeared. Rediscovered after World War II, it's been excavated and restored to what we see today - a ruined fortress surrounded by tourist shops! Don't let me put you off, Les Baux is fascinating and has some of the best views you could possibly imagine.

Tonight we finish our day in Cavaillon in a delightful old quarter of the town at the Hotel de Parc.

Day 4 The Lubéron National Park, and the Abbaye de Sénanque

Having left the Alpilles behind, we cycle into the Lubéron. Today, there is a memorable hill! Read on...

First of all we'll visit the beautiful village of Gordes, where we'll take a break and enjopy this delightful village. Then it's away into the Lubéron, climbing to visit the iconic Abbey de Senanque - even the Michelin guide calls the Abbey 'iconic', so I'm on safe ground. I'm not sure I can improve on Michelin's description: "... beautiful, isolated Cistercian Abbaye de Sénanque surrounded by a sea of lavender".

Leaving the Abbey we're still climbing a beautiful road through stunning Lubérion scenery, and we'll earn our spectacular descent into Carpentras. We stay just outside Carperntras in Monteux, and we'll enjoy stunning views of Mont Ventoux, The Giant of Provence, which we definitely DON'T have to cycle up!

Day 5 A Day Cycling Through Vineyards

Tonight we're returning to Monteux, so you get a day off packing! And today we explore some fabulous wines from some of the best appellations in Provence.

There's some more climbing today, but less than yesterday, and the scenery is beautiful. On our little loop today we'll cycle through the appellations of Beaumes de Venise, Gigondas and Vacqueyras, after Chateauneuf du Pape probably the best appellations in the Cotes du Rhone region.

We leave the hills of the Lubéron behind. Today is a day of two halves. In the morning we stay on tine roads as we head towards Courthezon, and we'll visit a vwey interesting vineyard, the Caves Jamet. We'll learn a lot about the rukes of appellations - and not all of it good! The motorway cut this vineyard in half, and as a result the owner produces Chateauneuf du Pape, and Vin de France (the lowest classification available). It's the same wine! He's a fascinating and funny guy, you'll enjoy Caves Jamet.

In the afternoon we arrive in Orange. Until recently this town was home to the French Foreign Legion, but it's more famous as a retirement town for retired Roman soldiers, and today boasts a truly spectacular Roman Theatre - we'll visit before dinner.

We'll also have a look at the huge triumphal arch that dates back to the reign of Augustus. The Theatre and the Arch together are classified as a UNESCO World Heritage Site.

Day 7 Chateauneuf du Pape, and Back to Avignon

A pretty flat day, just a short climb at the end of the day. Leaving Orange, we've a short ride on back roads to the world-famous wine village of Chateauneuf du Pape. It's a thriving place, completely devoted to its famous wines, and we'll visit the Domaine de Nalys to find out what the fuss is about. We'll also learn about olives in their beautiful olive groves, where we'll picnic when weather permits (this is Provence, weather nearly always permits!)

After lunch, we'll cycle along a series of islands in the Rhone as far as Avignon. We'll have plenty of time to explore Avignon, it's a wonderful place. Completely surrounded by its 3-mile wall. In the 14th Century, fleeing chaotic violence in Rome, Pope Clement V moved the papacy to Avignon, which became the base for a total of 7 popes.

One of these, Benedict XII, supervised the completion of the largest gothic building in France, the vast, fortified Papal palace. We'll have time for a look round, but in fact the most spectacular aspect of the palace is to view it from the outside and marvel at the sheer size of the thing. There's a marvellous atmosphere in the centre of Avignon, open squares full of cafes, restaurants and street performers.

Leaving Avignon, we cross the Rhone for one last time and climb the short hill back to Villeneuve les Avignon and the Residence les Cedres. That's it, one final dinner together at the Hotel Les Cedres, and tomorrow we part company. Temporarily, I hope.

Please take careful note of the train times. Our transfers are scheduled to meet these designated trains; if these train times are inconvenient, please contact us so that we can be sure of arranging appropriate transfers.

FROM LONDON TO JOIN TOUR

RETURN TO LONDON AT END OF TOUR

'From London' includes both Eurostar and TGV return tickets, and local transfers. Please note, there is a change of trains in Lille Europe. Local transfers are from and to Avignon station and your hotel.

RETURN TO PARIS CHARLES DE GAULLE AT END OF TOUR

Airport transfers are from and to Avignon TGV.

FROM PARIS TO JOIN TOUR

RETURN TO PARIS AT END OF TOUR

'From Paris' includes return TGV tickets, and local transfers. Local transfers are from and to Avignon station and your hotel.

Local Transfers are from Avignon TGV to the first hotel, and from the last hotel to Avignon TGV.

Please take careful note of the train times above. Our transfers are scheduled to meet these designated trains; if these train times are inconvenient, please contact us so that we can be sure of arranging appropriate transfers.

FROM LONDON TO JOIN TOUR

RETURN TO LONDON AT END OF TOUR

FROM PARIS TO JOIN TOUR

RETURN TO PARIS AT END OF TOUR

DAY 1: Arrive in Avignon - City of the Popes
DAY 2: St Rémy de Provence
DAY 3: Our first little climb, in The Alpilles
DAY 4: The Lubéron National Park, and the Abbaye de Sénanque
DAY 5: A Day Cycling Through Vineyards
DAY 6: The Spectacular Roman Theatre In Orange
DAY 7: Chateauneuf du Pape, and Back to Avignon
Map
Joining details
Book now
We use cookies on our website to give you the most relevant experience by remembering your preferences and repeat visits. By clicking “Accept All”, you consent to the use of ALL the cookies. However, you may visit "Cookie Settings" to provide a controlled consent.
Cookie SettingsAccept All
Manage cookies

This website uses cookies to improve your experience while you navigate through the website. Out of these, the cookies that are categorized as necessary are stored on your browser as they are essential for the working of basic functionalities of the website. We also use third-party cookies that help us analyze and understand how you use this website. These cookies will be stored in your browser only with your consent. You also have the option to opt-out of these cookies. But opting out of some of these cookies may affect your browsing experience.
Necessary Always Enabled
Necessary cookies are absolutely essential for the website to function properly. These cookies ensure basic functionalities and security features of the website, anonymously.
Functional
Functional cookies help to perform certain functionalities like sharing the content of the website on social media platforms, collect feedbacks, and other third-party features.
Performance
Performance cookies are used to understand and analyze the key performance indexes of the website which helps in delivering a better user experience for the visitors.
Analytics
Analytical cookies are used to understand how visitors interact with the website. These cookies help provide information on metrics the number of visitors, bounce rate, traffic source, etc.
Advertisement
Advertisement cookies are used to provide visitors with relevant ads and marketing campaigns. These cookies track visitors across websites and collect information to provide customized ads.
Others
Other uncategorized cookies are those that are being analyzed and have not been classified into a category as yet.
SAVE & ACCEPT
Powered by